The blog is not dead, just dead tired from work.  I've been doing a lot getting the new system up and running as well as inventing new style of beer.  I'll come up with a catch up post soon but in the meantime here's some picture of what I've been up to. 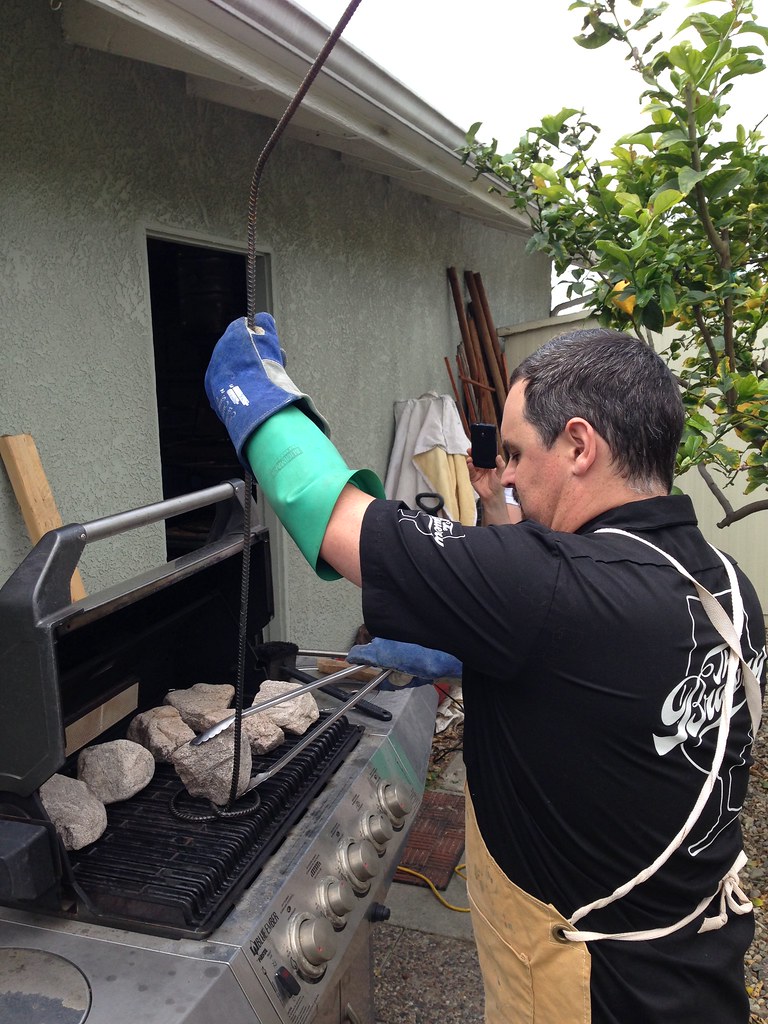 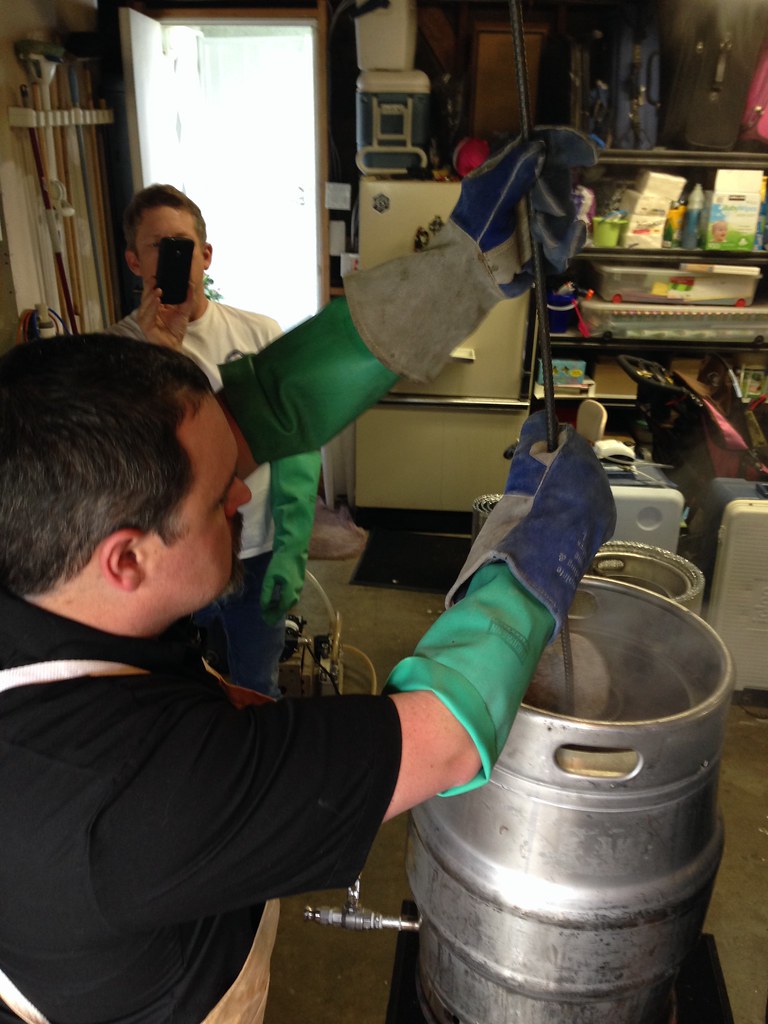 That's all for now, see you soon

I’m so far behind on posts that this one is going to really cover three topics.  The main topic will be the construction and testing of my flat brewing surface currently known as SNB Brewhouse v3.5.  The other topics that will be lightly touched on are BSS aka Bitter Sweet Symphony Remixed and 35ish my annual “birthday” brew based on Kate the Great.  Grouping all these together actually makes sense as they are really all part of figuring out how to brew on a flat surface.

It had been almost 6 months since I’ve brewed a beer at my own house.  This was mostly caused by me stripping my previous system for parts for a new system while waiting for a flat brutus style stand to be built for me.  Almost a month ago I got tired of not being able to brew at my house so I jerry-rigged together a brewing setup (dubbed Brewhouse 3.5) using my old headboard and pieces from my various set ups.

It was pretty fun building a new manual flat surface brewhouse. I’d been playing with pumps before to move water and wort to different places but always had the ability to use gravity for certain steps. Going to a flat surface meant learning how to move liquid exclusively with pumps.  To do this I needed to upgrade my hoses and connections to make moving wort more efficient.  On the connection side I looked into the one handed quick disconnects and triclamps but decided to go with cam & groove fittings similar to the ones Shawn uses. The side benefit is when I brew with him I don’t have to worry about modifying either setup to get them to work together! For this setup I relied heavily on Brewers Hardware for a great selection of fitting, included the wide bore 1/2" Cam and Groove Coupler X High Flow 1/2" Hose Barb.

The other thing moving to a flat brewing setup meant that I would need to finally transition from batch sparging to fly sparging.  I’ve been batch sparging as long as I’ve been all-grain brewing mostly because I didn’t have a HLT, well I had one (which will make its debut as a mashtun in Brewhouse 3.75) cut and drilled I just didn’t have it setup with the hardware.

Part of both learning to use pumps more efficiently in brewing and fly sparging meant valves valves and valves.  Whereas before I only had 2 I now have valves of all shapes and sizes. Using them all really gives the feel of working in a larger scale brewery.  It was also fun to get my daughter to help open and close valves.  Part of learning to use valves was learning where to put them in reference to pumps. Basically you never want to restrict the flow of liquid into the pump which means only placing valves after the outflow.

The one disappointment about moving to new hardware was that the chill plate Bonnie got me for my birthday the previous year won’t work anymore.  It was designed to work with a hose barbs and a garden hose neither of which I could really adapt in my new system as you’ll see from the pictures.  I ended up selling it and a pump I only used for cooling water to my mom and stepfather.  I used the proceeds to buy a new larger 40 plate heat exchanger straight from Duda Diesel with 1/2" Male NPT to attach new fittings and a ball valve directly to it.

I still have some work to do in calibrating the new equipment and entering the values into BeerSmith for more accurate brewing.  I have been coming up a little short on my preboil gravity but making up for it in my boil at the cost of being under my post boil volume.  It would also help to brew some session level beers to help determine my new efficiency instead of the large beers I’ve been brewing.  I don’t want to spend too much time right now as my new brew (probably Westbennetteren 12 b3) will be on Brewhouse 3.75 (stand without automation) and I have a pretty good feel for how it is preforming in its 3.5 configuration

Before I jet, let me briefly talk about the two “calibration” beers BSS and 35ish.  BSS is the codename for Bitter Sweet Symphony Remixed which is a rebrew and retool of Bitter Sweet Symphony from last year.  I wasn’t happy with how it turned out as a lager so I switched it to WLP007 and changed the rice to brewer’s sugar. Currently it’s on a strange journey that I right now don’t know how it will end up.  35ish is my annual birthday brew based on the Kate the Great recipe.  It gains the “ish” this year as even though everything was set and ready to go on my birthday I wasn’t “physically able” to brew that day getting around to it a few days later on the 1st of January.  It’s currently in a keg for a long cold secondary.

Last December (of 2012) I wrote a recap of QuadFest 2012, a get-together tasting that my friends Daniel, Shawn and myself had a put together in order to try a series of quadruples that we had brewed at the start of that year.  We all felt that it was a very fun and successful event that we wanted to do again next year.  We also decided that we wanted to expand the field of participants by extending invitations to brewers whose beers we've enjoyed in the past and run it through our Fellowship of Tao Brewers Google group.
We presented the idea of QuadFest 2 - the Quadening, along with a style presentation on brewing quadruples at the January meeting of Tao.  It was met with a lot of positive feedback and interest so I started a new discussion topic for QuadFest 2013 the next day.

The guidelines for new participants were very simple; brew a quad that quarter (sooner the better to give it time to age), bottle it in later summer, come to QuadFest 2013 and have a great time.  There was no set recipe to follow but I included the presentation on quads with some “tips” along with my recipe for Westbennetteren 12 b1.  I still think the recipe would be incredibly easy to convert to extract.  We used the thread all year as a place holder for recipe development, feedback, advice and planning.

As QuadFest 2013 approached I scrambled to finish some pretty slick participant shirts giving them free range over color and logo set (I had started over the summer but my new job zapped my time).  Daniel also had a set of chalices made with both the QuadFest 2013 logo and the Fellowship of Tao Brewers logo.  The chalices came out incredible taking the silly seriousness of QuadFest to the next level. Once more the Globe hosted us and ended up reserving front tables just to fit us all in as we ended up increase participation to 10 quads and expanded the number of people in attendance to 18 which for once included my wife which made me very happy.  We divided the quads into two flights; Classic (pils/2-row with candi syrup) and Belgian Dark Strong (inclusion of specially malts). Before each one Daniel presented a commercial example for calibration.

10 excellent quads from 10 excellent brewers, each one was nicely executed and delicious but still 10 quads… So where do QuadFests go from here?  I’m concerned that we might have outgrown the Globe for next year as we continue to expand. In addition sampling 10 quads is a tough job but I think with a more structured setup we can maybe handle about double that many next year.

Next year I see QuadFest 2014 going through another expansion in its original format, but with a few slight changes: Early requirements for how much will be needed for QuadFest (3-4 x 750mls) for better planning come bottling. Set the date further in advance, possibly over the summer. Find a new venue to allow for a more focused event with better lighting, I’m hoping we can convince Brad over at Peace to both participate and host. QuadFest 2015 will happen but only time will tell what form it will take.